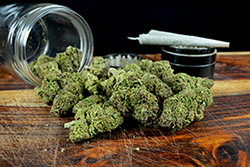 If you’re facing marijuana drug charges, you’re undoubtedly scared. You probably also have many questions about what will happen next, the penalties you can face, and how you can defend yourself. The first step in resolving your legal problems is to hire an experienced criminal defense attorney at The Law Office of Kenneth W Mullen PC to guide you through the process.

Many states are loosening or eliminating marijuana laws or declining to prosecute simple marijuana possession charges; Texas is not yet following this trend. Texas still has some of the strictest drug laws in the country.

The severity of the charge for a marijuana-related crime depends on three factors in Texas:

Possession of 2 ounces of marijuana or less for a first conviction is a misdemeanor with a maximum of 180 days in jail and a $2,000 fine. However, penalties increase as the amount of marijuana at issue increases. A charge for possession of 2 to 4 ounces can result in 1 year in jail and a $4,000 fine. Possessing more than 4 ounces is a felony. For felony marijuana possession, the penalties increase dramatically:

Possession of any amount of a marijuana concentrate like hashish is a felony in Texas. Concentrates can include THC wax and oil like those used in vape pens, making possession of these vape oils a felony under Texas law.

A charge for selling or distributing marijuana may come with steeper potential sentences depending on the amount in question. For delivery of marijuana ¼-ounce (7 grams) or less, the crime is a misdemeanor. Delivering more than ¼-ounce of marijuana is a felony, the severity of which is determined by the weight of the marijuana delivered

Selling any amount of marijuana concentrates like hashish is a felony in Texas. With penalties this severe in Texas, you need the experienced and skillful representation of The Law Office of Kenneth W Mullen PC.

In Texas, even possessing marijuana paraphernalia is a crime. Paraphernalia includes “equipment, product, or material that is used or intended to be used for the purpose of planting, cultivating, manufacturing, producing, processing, testing, packaging, storing, or concealing a controlled substance.” Paraphernalia can include vape pens, bowls, water pipes, bongs, cigarette rolling papers, small plastic baggies, grinders, and spoons. Typically possession of marijuana paraphernalia is a Class C misdemeanor punishable by a $500 fine and no jail time. However, possession with intent to deliver can be a Class A misdemeanor, and intent to deliver to a minor is a state jail felony.

In addition to penalties for marijuana possession, manufacturing, and distribution, the Texas Controlled Substances Act also prohibits the possession, manufacturing, and distribution of drugs such as phenylcyclohexyl piperidine, commonly known as PCP; methylenedioxymethamphetamine, commonly known as MDMA, molly, or ecstasy; hashish; and other drugs derived from cannabis.

Simple possession penalties depend on the weight of the drug involved. Penalties range from a state jail felony up to a first-degree felony:

2. Delivery, Possession with Intent to Deliver, and Manufacturing

Potential penalties for delivery, possession with intent to deliver, and manufacturing also vary depending on the weight of the drug involved.

Texas drug law does increase penalties for aggravating circumstances such as injury, death, or crimes involving children. If serious injury or death results from ingestion of a Penalty Group 2 substance, the offense is a first-degree felony, punishable with a life sentence.

Some legislators in Texas are working hard to pass laws that will decriminalize possession of marijuana. In some areas, particularly those around large Texas cities, prosecutors are more likely to decline to prosecute marijuana cases unless you’ve had a history of criminal activity, or the arrest was exacerbated by other serious charges (i.e., unlawful gun possession).

While we wait for Texas law to change, you need an experienced criminal defense attorney who can help you obtain the best possible outcome in your drug case. Contact The Law Office of Kenneth W Mullen PC today to speak to a seasoned Texas criminal defense attorney with years of experience defending Texans from drug charges. Give us a call at 817-406-9656 or contact us online.